Is this the top?

In a note to clients on Friday, UBS strategist Julian Emanuel suggests that a few signs pointing to the “endgame” for stocks are coming into view.

The basic outline is that once the Fed starts raising interest rates the wheels are set in motion for the stock market to go lower.

Emanuel notes that both the 2000 and 2007 stock market sell-offs have been preceded by a collapse in merger activity and a rotation into financial stocks and out of utility and consumer staples.

The same themes have been playing out in markets recently, and it has Emanuel nervous.

“And while age alone does not portend the definitive end of a Bull Market,” Emanuel writes, “the current rally, at 2,611 days, is now the second longest in modern history, behind only the 1990-2000 bull market.

“Yet the current milestone comes just as ‘Signs of The Top’ become clearer — a surge in M&A activity in 2015 exceeding the heady days of 1999-2000 and 2007 followed by a lull in deal-making catalyzed by extreme market volatility, ending in the largest quarterly rebound since 1933, from -11.4% to close the quarter +0.8%.” 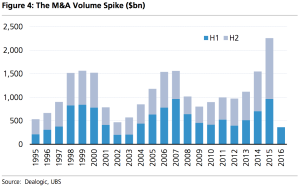 Mergers are seen as possibly the clearest sign that investors and corporate managements are confident in the current market and economic cycle. You could perhaps see merger activity as the corporate equivalent of a consumer-confidence survey.

Additionally, markets have seen a rotation into financial stocks — which are expected to benefit from higher rates — and away from consumer staples and utilities, which are often big shareholder-return stocks that supplement fixed income in times of low rates.

The equity market volatility comes on the heels of the Fed’s first rate hike in 9 years, on 12/16/2015, with the first hike in the cycle traditionally being the demarcation point for the ‘countdown to the bull market peak’ with an intervening ‘time to the top’ of as short as 8 months to as long as 41 months post the first hike.

The leadership change of recent weeks, into Financials and away from Utilities and Staples is reminiscent of the last stages of the 1999-2000 bull market top.

And so simply put, two things are happening in markets right now that have historically preceded the end of big bull market runs.

Now, despite the warning signs coming from the market, Emanuel still thinks we’ll see new highs in the stock market this year, with his year-end price target for the S&P 500 sitting at 2,175. On Friday morning the S&P 500 was trading at about 2,060.

And as Emanuel notes, stocks usually do go higher after the beginning of an interest-rate-increase cycle. But it is this interest-rate increase that puts the eventual demise of the market in plain sight.