Americans are saving more — and it’s killing the economy

Americans are saving more money, and it’s becoming a problem for economic growth.

In a big note out Wednesday, Peter Hooper and the economics team at Deutsche Bank look at the recent rise in the savings rate and what it means for the future of US economic growth.

In short, Americans are taking potential growth and sticking it in their pocket.

Growth has slowed meaningfully over the last two quarters, and the deceleration in consumer spending, which fell from a 3% annualized growth rate in Q3 2015 to 1.9% in Q1 2016, has been an important driver of this slowdown. Our analysis suggests that while the saving rate may stabilize and even fall slightly, a sharp decline that would significantly boost consumer spending is unlikely. Therefore, while growth is likely to pickup in the quarters ahead, it should also remain modest.

Now at 5.4%, the savings rate is still low(ish) on a historical basis. But the recent uptick has been confounding to economists given not only the decline in oil prices but the strength of the labor market.

The thinking here being that if you’re saving money on gas, you might spend it, and that if you go from having no income to some income, you’ll spend that, too. 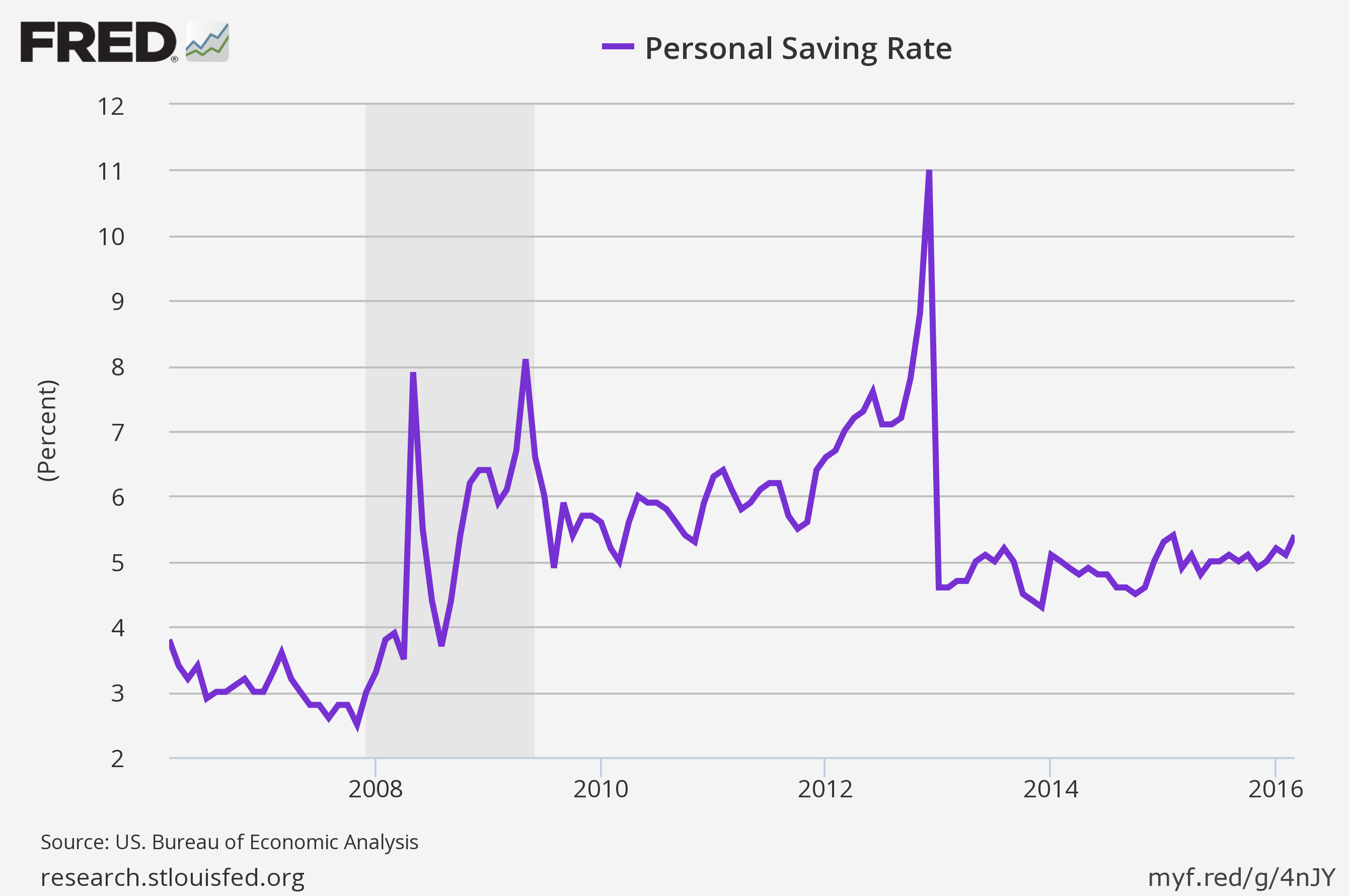 This isn’t the first time we’ve written about how the savings rate’s increase is problematic for an economy driven by consumer spending. See here and here.

Consumer spending accounts for about two-thirds of gross-domestic-product growth. This ranges from people buying stuff like clothes, cars, and televisions, to food, to services, to gym memberships. And the math on this is simple: More saving equals less spending, which nets less economic growth.

But the puzzlement from the economics community on why savings are increasing is always an interesting line of thinking to explore.

In its report, Deutsche Bank includes the following chart, which shows a clear preference for Americans to save rather than spend money since the financial crisis. 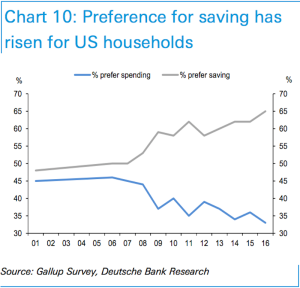 Assets of all types declined in value during the financial crisis. Most notably among these assets were home prices, which are a major driver of consumption. And so it’s easy to see why Americans went from wanting to save and spend money in equal proportion to essentially saving $2 for every $1 spent.

A note from Mike Ryan of UBS published back in March neatly captured the standard line of economic thinking on the savings rate “puzzle.” Ryan writes (emphasis mine):

One of the curious anomalies of the current stage of this economic expansion is the more measured role being played by the consumer. Despite the seemingly supportive combination of improving labor market conditions, rising wages and salaries, and lower energy costs, consumer spending has not expanded at the pace many would have expected at this point. Instead, consumers appear content to simply continue socking away the windfalls from both wage gains and energy price declines, as evidenced by the rise in the domestic savings rate.

Now, the thinking here is sound: If someone has less money and then the next day has more money, the person might want to spend that extra money.

Additionally, with the labor market strong it seems that conditions are ripe for more Americans to expand their spending and, ideally, even use a little bit of a leverage to stretch that power further.

But thinking that American consumers would prefer to save rather than spend additional income just a few years after the worst recession since the Great Depression does not at all seem crazy to me. To make up for a loss in net worth, you’d think that “save more” is about the easiest fix one could make.

Of course, economists are not entirely blind to this dynamic of postcrisis uncertainty driving consumers to save rather than spend.

Deutsche Bank writes: “One possibility [for explaining the higher savings rate] is that there may be an ongoing shift toward a desire for more savings, irrespective of the level of wealth, interest rates, and other factors … This shift toward more savings may arise because the macroeconomic environment is viewed as inherently riskier following the financial crisis.”

But struggling to understand why Americans might be more inclined to save money after having seen their net worth plummet almost overnight is the kind of argument only an economist could really love.