Building Character One Snow Shovel at a Time

Most people will know immediately who you mean when you say you grew up with Calvin and Hobbes. Not the philosophers: the toddler boy and his stuffed tiger. Bill Watterson’s famous cartoon strip duo spent their days exploring the woods, careening down snowy hills on their toboggan, and being a general prepubescent nightmare to teachers and babysitters alike. Winter editions of the strip often featured Calvin mumbling to himself waist-deep in snow with a shovel over his shoulder having been banished outdoors by his father. Calvin would gripe about his situation and whine to his father who would brush off his son’s ire with these words:

We’ve all been in Calvin’s snowshoes. At one time or another, we’ve had to break our backs doing the dirty work or just plain doing something we don’t like to do. Isn’t this sort of thing what snowblowers are for? Maybe climate change gets a bad reputation if it means no more shoveling heavy snow one blade-full at a time. And it seems like the work is never done. Just as there’s always one more task we’d rather not do, so too was Calvin always faced with one more heavy snowfall to contend with.

But therein lies the lesson. Every time Calvin was tossed out into the cold with his snow shovel and his father’s off-hand words at his back, Calvin did something extraordinary. He took his ample resources (bountiful snow and plenty of hours) and made incredible snow sculptures! These often disturbing and hilariously fantastic snow beasts were a running gag in the series. And yes, while they were a bit morbid from time to time, there was no denying Calvin’s natural talent and ingenuity. Even his own parents (begrudgingly) had to admit Calvin’s brilliance.

More often than not, Calvin’s peers and parents didn’t actually appreciate what he produced. He was a bit of tortured genius that way. But the reader saw, the reader appreciated. Life and business are like that: when you’re just starting out, sometimes your efforts are passed off as too big or too different. Calvin teaches us to not be afraid to think big and go for abstract ideas because they will be seen and they will pay off.

Calvin was handed a task he may have loathed doing, but with it, his character actually did build. His creations may have been weird, but they stood out and created an identity for their maker. What he did best he did at a time when he was forced to do something he disliked, but he turned it to his advantaged and gained notoriety for it. 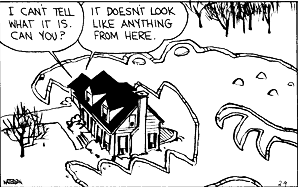 “I can’t tell what it is, can you?” “It doesn’t look like anything from here.”

And that’s what good marketing does: it slows viewers down and catches their attention. It makes people stop and stare. So be like Calvin; just don’t grumble and whine because your boss is not going to be as tolerant as Calvin’s father.

6 thoughts on “Building Character One Snow Shovel at a Time”