In Sydney Finkelstein’s book, “Superbosses: How Exceptional Leaders Master the Flow of Talent,” highly successful entrepreneurs share their stories of finding and helping develop promising employees. The difference, Finkelstein shows, between a good boss and a “super” boss is that while a good boss hires and leads a team to success, a super boss will nurture the talent inherent in the team they have and eventually watch that talent expand.

That means letting go of employees. I know, I hear you screaming, “IF YOU LOVE SOMETHING, LET IT GO!” That’s the same idea. When you discover a mountain spring, you dig around the source, widening the opening and letting more and more fresh, cool water come forward. But you won’t share that life-giving force with anyone by keeping it dammed up. You have to let go and watch it flow and spread and carry on on its own.

In a way, a superboss doesn’t just stop at having a team: a superboss builds an empire. They are not out for themselves. They find individuals who stand out and take them under their wing in a three step process.

1. The Master and Apprentice relationship. Apprentices were originally young boys or girls who were sent to study a trade with a mentor. They lived with the master, almost adopted in a way into their family. The master provided wisdom, discipline, and helped the apprentice every step of the way until the apprentice could one day be a master on their own.

2. The “Cohort Effect.” Rather than making employees treat each other as stepping stones, a superboss encourages people to challenge and push each other to succeed. They act more like a human pyramid than a ladder and in that way, some shine especially bright, but they owe their success to everyone else.

3. Saying Goodbye. Really, it should be “Saying See You Soon” and not “Goodbye,” since the later implies that you’ll never see the employee again. This part of the relationship is where the employee and the superboss part ways. But a true superboss remains in touch with the former employee, building on that relationship and forming a stronger and longer lasting bond. The success flows from one group to another and on and on.

The stories in the book come from individuals like Lorne Michaels, Julian Petersan, Cay Chiat and Alice Walters and provide everyone’s unique perspective on the same super-being: The SuperBoss! 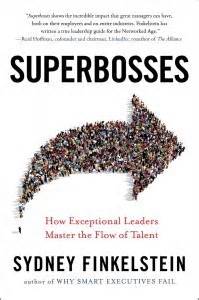