Today we’re surrounded by debates en masse. Pundits stand before us pontificating on what they have over their opponent. Ugly slurs are thrown from one side of the room to the other. No, this isn’t about the 2016 Presidential Race. This is happening in your office with your co-workers.

To say that you don’t get involved with office politics is like saying you don’t really “get” this wearing shoes thing that the kids are doing. No matter what the environment, when several personalities gather and everyone has their own opinions and motives, there will inevitably be some some controversy. There are always those people who excel and those who out of jealousy or resentment will envy them their success. There are those people who seem to have an abundance of pet peeves and want to voice their opinions to anyone who will listen. There are bullies. There are doormats. All of these intersecting personalities breed a political hotbed of good, bad, and ugly. Everybody is involved in office politics, and prior to popular belief, there are ways to use office politics to your advantage.

First, pay attention. Listen for those hot-button topics that tend to send co-workers into a rage. Listen for the conversations that everyone is passionate about. Keep an eye on who is invited to important meetings and how often that occurs. Take notice of who seems to know more faster. More difficult is paying attention to the people who aren’t so well-included. These Titanics-in-miniature are falling behind and can sometimes be the source of petty drama. You’re not running from these people so much as noticing their strengths, weaknesses and alliances and then playing the game accordingly. If you notice a group spends a lot of time having lunch with the supervisor or works on bigger projects, find ways to get to know them better.

The next thing to consider is how to form alliances around your office. Think of it like rock climbing. You want as many stable footholds as you can find. Positioning yourself with this strategy ensures that if one alliance falls through, you’ll have several other options to rely on. Having your foot in so many doors also ensures that you are seen as a reliable and flexible person who several people are willing to work with.

It’s also important to consider that timeless mantra, also known as the Golden Rule: Treat others the way you want to be treated. Would you want others talking about you behind your back? Would you appreciate being passed over for a project or promotion based on what someone said they had seen you do? Also try to keep things in terms of win-win. Just because office politics exist, doesn’t mean someone has to always be a loser. Being the person that others can look to as a problem-solver and a fair judge will help you get ahead and avoid any negative work talk.

And unfortunately, negative talk is as commonplace as paperclips in any office. The only way to control it is to be mindful of it and avoid fanning the controversial flames. Simply standing by while a co-worker goes behind someone’s back or manipulates others is just as bad as if you were the guilty party. Speaking up is the fastest way to avoid a huge problem later.

With that strategic mindset, you want to remain goal-oriented. Keep your emotions out of your work relations as much as possible. You’ll be building bridges quickly and activities like backstabbing and manipulating burns them faster than you can reinforce them. Build strong, solid relationships with several people and you’ll really go places, so to speak.

To wrap up, office politics are cumbersome, but they are inevitable. But rather than rolling over and being another innocent bystander, using these tactics will help you navigate the worst of it and come out on top. 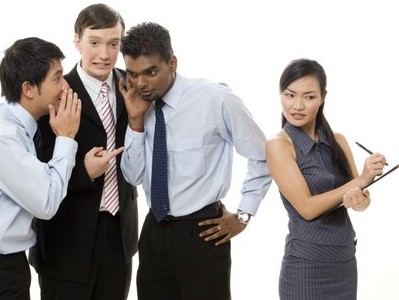