There’s a new driver of the global economy, and it changes how we should look at the world 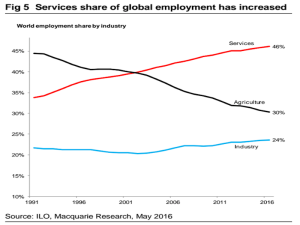 Economists and analysts like to fixate on the industrial sector, and that makes sense.

Data coming from industrial tends to be a bit more volatile, so historically it’s been pretty helpful in explaining the short-term swings in the economy.

But the less analyzed services sector is playing an increasingly larger role in the overall output and employment figures in the global and US economies.

And consequently, it may now be a better gauge of what’s going on in the world.

Services employment has surged to 46% of the global total in 2016, up from 34% in 1991. Over the past 25 years, about 75% of the 1 billion new jobs created in the world have been in services, according to figures cited by a Macquarie team led by David Doyle in a recent note to clients.

The same thing is happening with output data, as the share of GDP attributed to services has increased over the past four decades in both developed markets and emerging markets.

“Services have risen dramatically in importance and are increasingly dominant in shaping the outlook for global growth,” the Macquarie team wrote.

This was evident over the past two years as manufacturing PMIs showed weakness across major economies, leading many to conclude that a global recession was on the horizon. While this may have been the case in previous decades, in the current period the high services share in developed economies has made such an outcome far less likely. Services activity has held firm for the most part speaking to the underlying resilience of the global economy.

For what it’s worth, Deutsche Bank’s Torsten Sløk made a somewhat similar argument back in October 2015 via two pie charts, shown below.

Notably, although manufacturing makes up the bulk of the S&P 500, it’s responsible for just a sliver of the employed workforce. Therefore, Sløk argued at the time, we were seeing a profit recession, but not an economic recession. 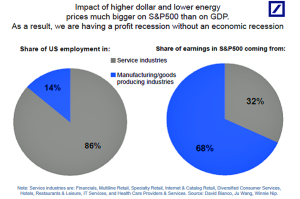 The Macquarie team also argued that our structural transition to a more services-based economy comes with key changes. For example, they argue we’ll see less economic volatility — given that the industrial sector is more volatile, if it makes up a smaller share, then overall volatility drops — and that trade increasingly will revolve around services.

Still, that may not be a bad thing. After all, lower productivity combined with more stability theoretically just means that we might be looking at a more “slow and steady” kind of world.

Or as the Macquarie team put it, “the rising importance of services has played a key role in our team’s view that the current expansion should continue to be characterized by structurally lower growth rates, but also by incredible persistency and resiliency.”