This is the jobs report we’ve been waiting for

The April jobs report was a disappointment.

And while any and all disappointments relative to the headline number get those who are bearish on the US economy all excited, this is really the kind of jobs report we’ve been waiting to see.

As the US economy pulls closer to full employment, economists have long argued that the pace of payrolls gains will simply have to slow down.

In a speech last year, San Francisco Fed president John Williams said that once the US economy is “operating at full strength,” only 60,000 to 100,000 new jobs are likely to be created each month.

And here we are.

Williams also anticipated Friday’s chorus from the bears, adding: “Commentators may call this [job growth] disappointing, and it was when we were climbing out of the hole the recession left. But in a healthy economy, it’s what strong, steady growth looks like.”

After Friday’s report, Neil Dutta at Renaissance Macro called this the best jobs report since January, writing: “Employment reports should be taken holistically. That means combining the growth in jobs, the length of the workweek, and hourly earnings. In this regard, the April jobs number was the strongest since January. The economy is at full employment. At full employment, the growth in payrolls slow and wages rise. We saw both in April.”

This annual rate of wage gains matches the fastest we have seen since the crisis — wages rose 2.5% year-on-year in both January and February. 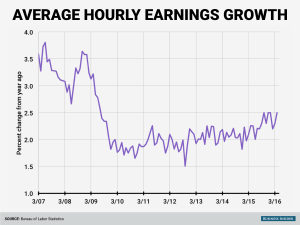 Of course, also hitting our inbox shortly after the jobs report were calls for another round of quantitative easing from the Federal Reserve before its benchmark interest rate — currently pegged between 0.25% and 0.50% — hits 1%.

And according to data from Bloomberg, there are no Fed meetings with as much as a 50% chance of an interest-rate hike out to February 2017. So the markets are taking Friday’s report as another sign the Fed isn’t going anywhere.

And maybe it isn’t. But a disappointing headline out of Friday’s jobs report is not an indictment of the US economy.

Because if the US economy continues to grow slowly but surely and the labor market remains intact, Friday’s report of modest job gains and solid wage growth is something we should all get used to.